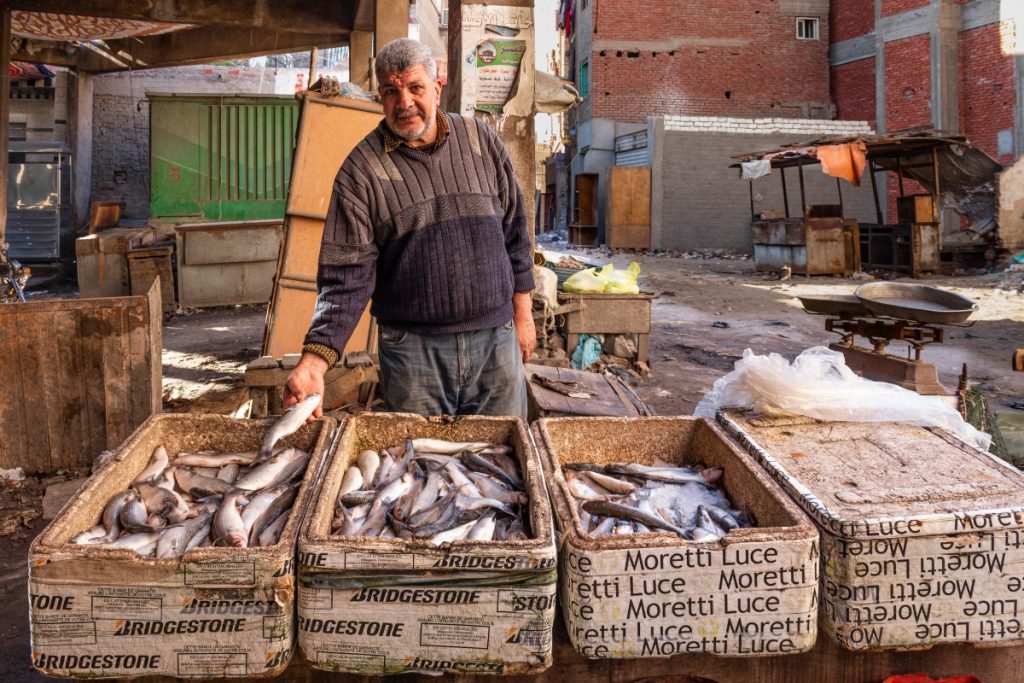 Have you ever been to a fish market in Egypt before? The answer is most probably no. Yet Nour Aboughaly, young Egyptian photographer, is giving you the chance to delve into the unseen worlds of Egypt.

For her graduation project, Aboughaly decided to go on a journey to discover the fish markets of Egypt, which as represents one of the main sources of income for many Egyptians and as a result led to the creation of different marketplaces, each depending on the culture and the traditions of every different city.

Seeing these unseen worlds through her lens, Aboughaly traveled to four different cities: Port- Said, El-Manzala, Damietta and Alexandria to observe and document the differences.

“I started my journey in my hometown, Alexandria. I got ready at 4:30 in the morning to catch the famous auctions taking place in El Anfushi fish market in Alexandria. It was still dark outside and the streets were quiet, but the closer I got to the market the more crowded it got until I arrived in front of it,” Aboughaly tells Egyptian Streets.

“Dozens of cars and restaurant trucks parked in front of the gates and tens of men were around. Even though it was super early, it was the most crowded market of the four I visited. I could barely make my way through the crowds. I stood on almost every empty table I could find in the middle of the market to take the shots and even though I was standing in a relatively high spot and was the only woman around, no one noticed me. Everyone was so busy to get what they came here for: the fish,” she adds.

It is difficult to capture the real and chaotic atmosphere in words, Aboughaly says, from the noise of the crowds, to piles of a variety of fishes with a clean and fresh aura, and the screams of the vendors to attract customers.

Yet the market is not only confined to the walls of the building, she says, but encircles it as well. Beyond the sea, there is a string of fishing boats that is connected to the worlds of the fish market, where fishermen receive everyday before dawn from them the fish in the early morning. Until Fajr prayer, workers transfer the fish from the boat to the designated tables back and forth, before they finally open their doors to the customers at around 8 in the morning.

In Port Said, Aboughaly visited one of the biggest fish markets in the Middle East, covering 82 trade shops, 104 pedestrian vendor shops, 30 wholesale shops, and 2 restaurants. As an important landmark and a vital source of income and trade in the city, it is well guarded and has its own police department. “The people of the city were extremely welcoming; they invited me to take a look at their shops and to photograph them. Everyone was ready to pose for the camera, happily smiling and showing off their fish, or just proudly standing in front of their very own treasure,” she says.

Pointing at his store fridge, Abdelhamid, a vendor, invited her to take a look at his exhibits and kindly offered different kinds of crustaceans. “A shrimp lookalike stood out to me; it’s a bit longer than a normal shrimp with a less saturated color. But Abdelhamid answered my unspoken thoughts and told me that this type of fish (Shekal) is in high demand from those of a lower class due to its cheaper price point, priced at 5-10 pounds per kilo. He also informed me that fishers used to throw the Shekal on the beach as they perceived it as akin to sea worms, but they gradually seized the opportunity and decided to sell them at an affordable price for a different class of people,” she adds.

Damietta, on the other hand, does not have the privileged experience of a massive indoor fish market, Aboughaly says. “Their fish market was simply a couple of shops and booth stands in the street, but for them this was the place to be. Each cart or shop had its owner standing behind it with a great sense of pride, waiting for their turn to be photographed. I must say their happiness that day was truly delightful, being photographed and interviewed gave them a unique sense of recognition that they are not accustomed to on their daily lives.”

Damietta alone owns about 65% of seafood wealth as it is surrounded by 3 water resources, the Mediterranean Sea, the Nile River, and Lake Manzala. “This is why whenever anyone wants to eat fish the right way, everyone tells them to head to Damietta. We have all types of fish, tilapia, mullet, shrimp, sepia, sea bass, and more,” Hajj Hassan, a fish vendor, told Aboughaly.

“I am so humbled that I had the chance to end my educational journey with an exceptional experience and a distinctive project that sheds light on the fish market in Egypt and particularly those unrepresented authentic individuals who work there. They go about their day-to-day lives with a warm and open reception of new experiences just like me when I dived into this project with a genuine interest to portray a fresh and candid outlook on the subject,” she says.

Social Media as an Asset: Online Friendships Flourish in a Pandemic

Bari Weiss and the Left-Wing Infatuation With Taking Offense