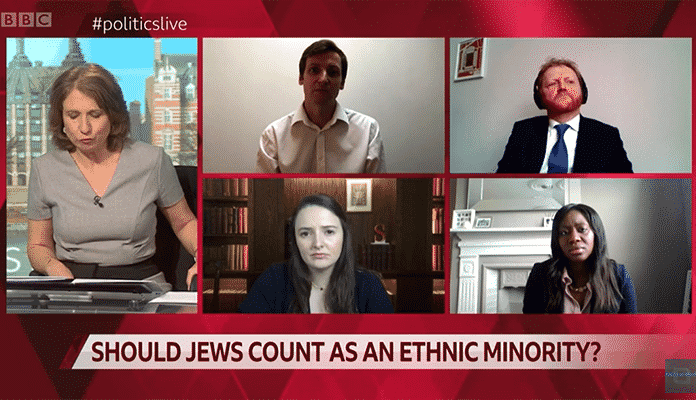 
An ethnic minority is defined as a group of people who differ in race or color or in national, religious, or cultural origin from the dominant group — often the majority population — of the country in which they live.

Jews are an ethnic minority in countries all over the world except the one country we can call home: Israel. We constitute less than 0.2% of the world’s population.

I guess it would be fair to say that not only are we an ethnic minority, but we are almost the epitome of one. For the almost 2,000 years we have lived in the diaspora, we have stuck out as “different” from the majority of those living in the countries of our residence, often being reminded of this by them. This has regularly manifested itself in discrimination and persecution, and even violence and murder.

But what do I know? I am just a Jew with a good knowledge of history and culture. The real experts on whether or not Jews are an ethnic minority are surely a bunch of non-Jewish people discussing the subject on BBC Politics Live.

This discussion has understandably caused an outrage.

PinkNews CEO Benjamin Cohen has expressed his anger after today’s Politics Live on BBC2 discussed whether Jews should be classified as an ethnic minority.

The panel of four non-Jews each offered their view on the subject, with Mr Cohen commenting as a guest.

After the programme he tweeted: “I’ve just been on the BBC’s Politics Live where the BBC literally just asked four non-Jews if they agreed with me that Jews are an ethnic minority. Imagine if I was Black and four white people were asked to judge if I was a member of an ethnic minority. It would be as offensive.”

He went on to criticise the “bizarre suggestion” made by host Jo Coburn (who is herself Jewish) that due to their political success, Jews don’t need “recognition in the same way as others.”

Our response to the “Should Jews count as an ethnic minority” question posed today by BBC Politics Live: pic.twitter.com/g5HECeX9y5

— Board of Deputies of British Jews (@BoardofDeputies) March 1, 2021

I can’t say I am the least bit surprised by this. In a time where we are constantly being gaslit, where Jews are being excluded by the intersectionality movement, where actual antisemites discuss what is and what isn’t antisemitism, this kind of discussion was inevitable. And what better place than the BBC to host it (perhaps the Guardian, on second thoughts).

In a way, the very existence of this discussion reinforces how no matter how “civilized” society becomes, no matter how successful some Jews become, we will always be treated like the other, where the normal rules of discourse and of everything somehow do not apply.