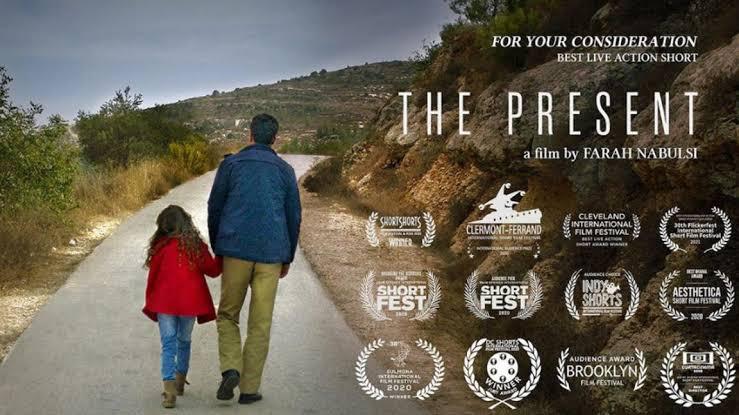 
The Present, a movie set in the occupied West Bank and directed by British-Palestinian filmmaker Farah Nabulsi, has won a BAFTA award for best short film.

The award was presented on Saturday at the British Academy of Film and Television Arts (BAFTA) awards ceremony.

The Present is Nabulsi’s directorial debut and was co-written with by Palestinian filmmaker and poet Hind Shoufani.

In her acceptance speech, Nabulsi dedicated the award to “the people of Palestine for whom freedom and quality is long, long overdue”.

The director later tweeted about her win, writing “Absolutely blown away!!! A BAFTA!!!”

Palestinian politician, activist, and scholar Dr Hanan Ashrawi was among many who took to social media to congratulate Nabulsi on her achievement.

Mabrouk Farah! Well deserved. We are so proud of you. Palestine celebrates with you. نحن نحبك. مبروك. https://t.co/OoM66ZMX5w

Translation: We love you. Congratulations

The Present, which was released on 2 February 2020, focuses on the story of Yusuf and his young daughter, who brave Israeli soldiers and checkpoints in their mission to buy a gift for his wife on their wedding anniversary.

The film, which was shot over six days in Palestine, opens at an overcrowded Israeli checkpoint, a scene that was filmed on location.

At a panel in the Other Israel Film Festival, Nabulsi said that particular scene was “probably the most rewarding” to make.

In a testament to the film’s raw and honest quality, Nabulsi has highlighted the authenticity of the backdrop of The Present‘s opening scene.

“The only fiction in that scene is our protagonist, Yusuf. All the other hundreds of Palestinians you see there are actual Palestinians going to work at the crack of dawn.”

The news of the film’s achievement was celebrated online, with a wave of tweets congratulating Nabulsi and her film, and expressing amazement at the news.

Congrats to everyone involved esp @farah_nabulsi and @Lagunadude on the Bafta tonight. Do watch The Present on Netflix, the 20min short film stays with you long after – and so it should. A very human story about love, dignity and impacts of occupation. https://t.co/wkqkX7XGlJ

Well done to @farah_nabulsi and all involved, congratulations on the best short film BAFTA.
The Present is such a powerful film that everyone should find the time to watch it.
It’s only 24 mins, and it’ll open your eyes. https://t.co/oJxZ9aTrv6

Akinola Davies Jr, director of the short film Lizard ,which was nominated for a BAFTA in the same category as The Present, also acknowledged the win in a tweet, congratulating “the whole team” behind the film.

The effects of the coronavirus pandemic on this year’s BAFTA awards were wide-reaching.

The ceremony, which was delayed by two months, saw some of its attendees appear remotely, while a select few appeared in person at the Royal Albert Hall in London.

The Present is also nominated for the Academy Award for Best Live Action Short Film at the 2021 Oscars, which are set to take place on 26 April.

The award-winning film can be watched on the online streaming service Netflix.

US Policy and the Resurgence of ISIS in Iraq and Syria