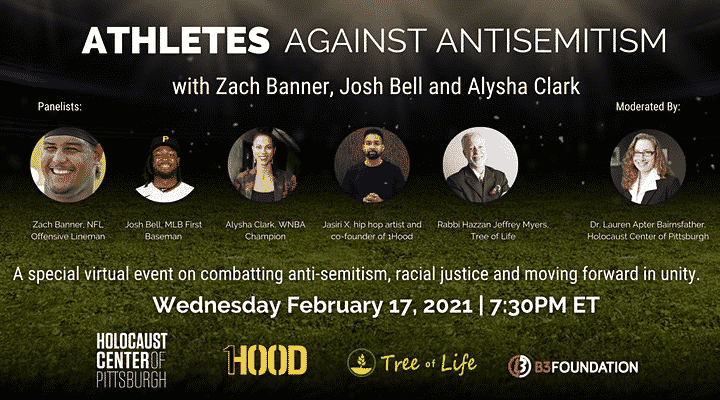 Join me, @Alysha_Clark, @JBell_19 and Pittsburgh community leaders for a discussion on combatting anti-semitism and white supremacy.

We already know how amazing Zach is as an ally to the Jewish community, so I was looking forward to it.

Then a controversy threatened to derail everything.

About a day before the event, it came to the attention of many that one of those participating was hip-hop artist Jasiri X, who is also the founder/CEO of 1Hood. This seemed highly problematic, given his past which includes his relationship with Louis Farrakhan, who he has called his “spiritual father”:

Jasiri X is affiliated with Muhammad Mosque No. 22 of Pittsburgh and calls Louis Farrakhan his “spiritual father.” pic.twitter.com/vGkVLHQHYw

his demonization of Israel, calling us an “apartheid” state, and even creating a song about it:

and his choice in friends :

With a day to go before the panel, the question was: what to do?

Some, like Stop Antisemitism, felt quick action was required; so they publicized all of this ahead of the event in order to pressure the organizers to remove Jasiri X.

Why is a Jew hater speaking on tomorrow’s panel ‘Athletes Against Antisemitism”?! @jasiri_x claims:

Jasiri is an antisemitic bigot! pic.twitter.com/XKiPcXJTCq

On one hand, I found his inclusion on the panel troubling as well. My issue was I felt publicizing this could embarrass Zach Banner, a genuine ally of the Jewish community. I preferred the backdoor approach – approaching him behind the scenes.

But time was running out. My contact was unable to contact Zach and the event went ahead with Jasiri.

I applaud Jasiri X for his unqualified apology. There were no excuses, no “I’m anti-Zionist-not-antisemitic” sentiments.

He directly confronted his past and even understood exactly why he was called out on it. That takes courage.

Just like with the case of Nick Cannon, I support building bridges with those who seem sincere in doing so, rather than tearing them down for past antisemitism. As the Rabbi said, this seemed like real teshuva.

I don’t regret my approach of not calling out Jasiri X’s participation publicly before the event because my concern for Zach Banner and not hurting him is not something I should apologize for. But in this case, there is no doubt the approach of those who did publicly call it out directly led to this powerful moment.