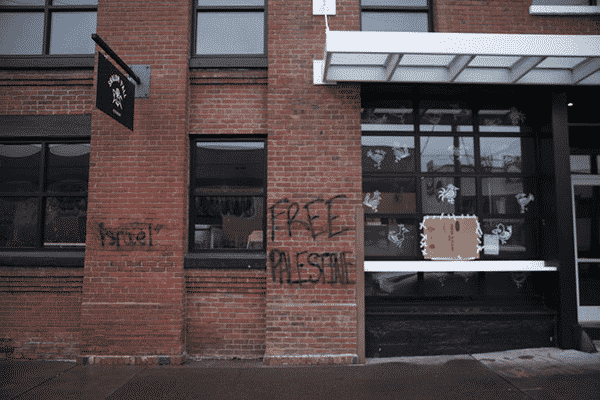 
Over the weekend, three Portland restaurants were vandalized with “Free Palestine” graffiti in antisemitic attacks.

Yes, antisemitic. But don’t take my word for it. Take the word of Jamal Hassan, a co-owner of one of the restaurants.

The Portland Police Bureau is investigating after at least three Portland Israeli restaurants were vandalized with “Free Palestine” graffiti late Saturday and early Sunday, according to a bureau spokesman.

Aviv, a hummus-focused vegan restaurant from Israeli chef Tal Caspi, and two locations of Shalom Y’all, formerly part of the Toro Bravo restaurant group, were targeted. Neither restaurant describes itself as exclusively Israeli, and each recently removed the “Israeli” descriptor from its signage.

Spokespeople for both restaurants said they didn’t want to “get into the politics” behind the incident. In a statement, Shalom Y’all owners Kasey Mills, Jamal Hassan and Laura Amans described the vandalism, which included “Free Palestine tags and other graffiti, as “anti-Semitic.”

“Most of the employees at Aviv are not Israeli,” Hoffman said. “Our chef is from Israel, but I don’t think he wants to be involved in the politics side of it,” noting the the restaurant had previously removed the word “Israeli” from its signage.

Shalom Y’all’s locations at 117 S.E. Taylor St. and 1128 S.W. Alder St. were targeted early Sunday, according to a Shalom Y’all spokesperson. Graffiti at the Southeast Portland location included “Yuppie Scum” as well as arguments that Israeli cuisine appropriates dishes from its Middle Eastern neighbors. “Hummus is not Israeli,” reads one. “Falafel is from Palestine,” reads another.

A guy called Jamal Hassan serving up Israeli and other mediterranean food should be celebrated as a great example of coexistence and tolerance.

Note also the graffiti. What does “yuppie scum” have to do with anything? Railing against the so-called “privileged class” based on their assumed ethnicity (Jewish) certainly gives the game away.

By the way, Shalom Y’all was targeted by antisemites late last year as well. Except then, they weren’t hiding their feelings towards Jews quite as well.

Portland police are investigating a possible hate crime after an Israeli restaurant’s phone system was targeted twice over the weekend by hackers, who used its number to threaten two other Middle Eastern restaurants.

Shalom Y’all Restaurant in Southeast Portland was full of customers Saturday night, but staff were dealing with more than just the dinner rush. Around 6:00 p.m., someone called and threatened an employee over the phone.

“We had the threatening phone call and very shortly after, a guest here let us know and clued us in to what was on the answering machine,” explained Shalom Y’all Restaurant managing partner Jamal Hassan.

Hassan quickly checked the restaurant’s answering machine and was shocked.

“It’s supposed to welcome everybody to the restaurant, I mean our name is Shalom Y’all, it’s for everyone,” Hassan explained.

However, the greeting he heard instead was anti-Semitic and homophobic.

Hassan said someone hacked into their phone system and replaced the voicemail greeting. When customers called, the greeting started by saying, “Hi, you have reached the stupid Jewish restaurant.” The recording continues with explicit and graphic language about employees performing sex acts on each other and on customers.

The restaurant worked with their service provider to fix the problem. But late Sunday, the phone system was hacked again with a new message that said in part, “You have reached the Jewish restaurant. If you b—— want to eat our s—– food, just come here and f— yourself.”

After the first message, Hassan changed the password and access codes for the phone system, so he has no idea how someone is hacking it.