Arab Perceptions of China During the Covid-19 Pandemic: Insights from the UAE 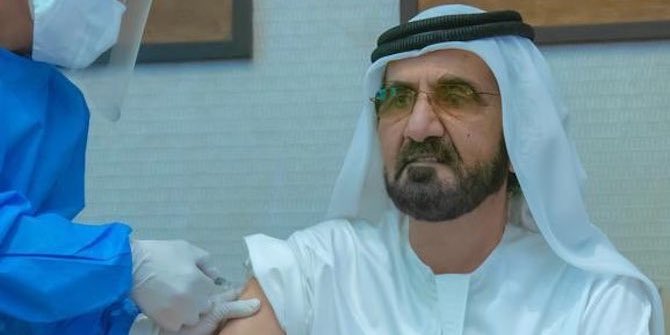 
by Yuting Wang and Lena Khalifa

On 3 November 2020, Sheikh Mohammed bin Rashid Al Maktoum, ruler of Dubai and prime minister of the UAE, tweeted a photo of himself taking the Covid-19 ‘Sinopharm’ vaccine, manufactured by the China National Biotec Group Company (CNBG). This act signalled continued Emirati support for China’s controversial vaccine trial, which was launched in the UAE in June 2020. Indeed, there have been doubts regarding the vaccine, such as its lacking ‘data and other critical details’. A month later, on 9 December 2020, the UAE became the first country in the world to approve the vaccine for public use, citing its 86 per cent efficacy rate. Despite the lack of public data on the vaccine trial and criticism towards China’s mishandling of early stages of the Covid-19 outbreak, the UAE and other Arab countries embraced China’s ‘Health Silk Road’ diplomacy.

The concept of ‘community of common destiny’ characterises China’s approach to the world order. Rejecting the inevitability of a zero-sum game in the international system, China advocates a new form of global cooperation, expressing its objective to achieve ‘common prosperity’ and ‘harmony’. China’s vision is largely supported by the Belt and Road Initiative (BRI) that was first proposed in 2013 by President Xi Jinping, during his visit to Kazakhstan. However, the ambitious infrastructure development plan received mixed reactions. On one hand, participant countries that were eager to boost their economic development were happy to see the rise of an alternative global power. On the other, criticisms have been levelled at BRI projects’ environmental impact, lack of transparency, and the growing risk of debt-induced distress that it could cause – suggesting a lack of trust in China, as well as concerns over the BRI’s potential use as a neoliberal tool of exploitation.

Nevertheless, China’s effort to advance the BRI in the MENA region was welcomed by Arab states, who have generally shown strong interest in the country’s model of state capitalism and its pragmatic approach to foreign policy. Well-positioned on the Maritime Silk Road (where one of the two BRI branches is located), Gulf states are some of the initiative’s early participants, and represent the leading destination of Chinese investment in the MENA region. The UAE, in particular, has become a regional hub of China’s state-owned enterprises and private multinational corporations. In 2018, Beijing further strengthened its bilateral ties with the UAE to the status of a ‘comprehensive strategic partnership’. Evidently, the ongoing pandemic has opened up new grounds for cooperation between the two states. While cooperation in the health sector has been part of the BRI since 2015, China’s aim to be perceived as a ‘responsible great power’ has come into greater fruition five years later.

Soon after China was able to contain the Covid-19 outbreak within its borders, its central and local governments responded efficiently to the needs of MENA countries, by dispatching substantial medical supplies and personnel to the region. Chinese state agencies, companies and individuals have also facilitated the transfer of medical advice and scientific knowledge in various forms. Gulf governments have generally expressed appreciation for China’s foreign aid. In contrast to the US, China proved itself as a reliable and accountable partner of the region.

However, according to a recent Pew Research Report, unfavourable public opinion of China has reached historic highs in 14 OECD countries. While China has played an active role in combating the pandemic in the MENA region, the Chinese state’s heavy-handed measures in  Xinjiang and Hong Kong may have significantly tarnished the country’s image. Although the pre-pandemic public opinion of China in the MENA region was generally positive, no follow-up study has been conducted thus far, during the pandemic. Is China’s health diplomacy working? Is there discrepancy between the governments’ attitude and citizens’ opinions? Given the UAE’s importance as China’s strategic partner and an entrepôt to the region, we set out to find out answers to some of these questions through a mixed-method study among Arab residents in the UAE.

We began with a survey asking Arab respondents about their perceptions of China before and during the pandemic. The survey was distributed via email to academic and non-academic institutions in Abu Dhabi, Dubai, and Sharjah. We also shared the survey link through social media, inviting UAE nationals and other Arab expatriates in the country to participate in the study. Since October 2020, we received 537 responses to the survey. Our respondents are between 18­­–69 years old and come from different Arab countries, including the UAE, Saudi, Kuwait, Bahrain, Egypt, Iraq, Algeria, Jordan, Lebanon, Syria, Morocco, Tunisia, Yemen, Sudan, and Palestine. Emirati respondents make up 21.69% of total participants. Most our respondents reported that they receive information about China from Western and Arab media outlets, as well as popular readings, such as travel books and novels. We asked respondents to report whether their perception of China changed as a result of different factors, such as: Covid-19, China’s economic contributions to the MENA region, as well as the impact of China-US relations on MENA countries.

While 47.7% said that their perception of China stayed the same since the outbreak, 30.4% reported it became ‘slightly more negative’, and 15.19% reported ‘much more negative’. Only 7% said that their perception of China was ‘more positive’. 85% reported that China was either ‘very responsible’ or ‘somewhat responsible’ for the coronavirus outbreak. Still, 62.19% of the participants thought Arab countries should collaborate with China to combat Covid-19. Almost 80% of the respondents believed that China made a positive contribution to the MENA’s economy. China-US relations are regarded as highly important to the MENA region. However, our respondents also demonstrated a lack of trust in China as a result of the pandemic. More than 50% agreed that Covid-19 had to do with food choices in China, such as eating certain wild animals. When asked about whether they would want to visit China for leisure, 31.45% of participants said they would not and 19.79% stated that they would be worried about doing so.

Following the completion of the survey, we conducted interviews on Zoom or Google Meet to delve deeper into perceptions of China among Arabs living in the UAE. By posting digital flyers on one of the researchers’ Twitter and Instagram accounts, we recruited 50 participants including 24 males and 26 females between the ages of 19­­–25, who identify as Arabs (mostly Emirati, Saudi, Egyptian and Palestinian) residing in Dubai and Sharjah. 21 respondents said that China was not responsible for the coronavirus outbreak. A Lebanese-Syrian respondent said ‘No, I feel like this thing, they just threw it on China. They are like okay let’s blame the bat soup’. Whereas 32 respondents believe that China has full or partial responsibility for Covid-19. A Lebanese college student stated, ‘Yeah I do actually [believe China is responsible], because like I said, I think they should have much more control over this, it could have just spread around China only’.

Considering the timely roll-out of the free vaccination programme in the UAE, we conducted follow-up interviews and a focus group with Arab students and community members at the American University of Sharjah (AUS), to assess whether the Health Silk Road initiative played a role in shaping people’s perception of China. A middle-aged Iraqi-British woman spoke positively about China’s response to Covid-19. Her family was among the early recipients of the Sinopharm vaccine. Younger respondents at AUS were less enthusiastic, however. An Egyptian undergraduate student majoring in mechanical engineering thought that the Chinese vaccine rollout in the UAE was implemented purely out of economic rationale and did not have any bearing on his views of China. He said, ‘there’s demand for vaccines. And when there’s demand, there’s supply (…) the UAE happens to be one of the customers for Sinopharm. It’s neutral. It’s business. So my perception of China has not really changed’.

The preliminary analyses of our research findings show that about half of the respondents maintain a neutral attitude towards China. However, there’s a visible drop in favourable opinions towards the latter due to the pandemic. China’s current and next steps in handling the pandemic situation using health diplomacy may have had a positive effect on Sino-Arab relations. As the BRI reboots amid the pandemic, in addition to the investment in infrastructure, trade, and health care, China needs to use its resources to enhance its soft power in the region in order to mitigate the negative impact of Covid-19 on its image. Nevertheless, it is clear that many Arab residents of the UAE continue to view China as a great power and an important partner of the region.

Re: Was the US Embassy move to Jerusalem actually a hoax?