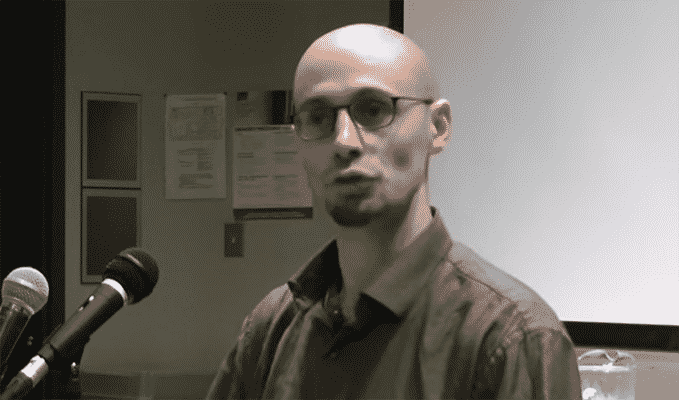 
A few days ago, I posted about BDS-hole Karen Rodman, who let down her antisemitic guard when she promoted the sale of Israeli wine – because it was made by an Israeli Arab – while promoting the boycott of Israeli wine made by Jews.

A guy called Yves Engler has now leapt to her defence. But rather than address the actual allegations against Rodman, he merely tells us how great she is, while attempting to smear those who called out her blatant antisemitism.

But his attempted defence of her is even worse than that. You see, when it comes to antisemitism, Engler makes Rodman look like a Girl Scout.

There must be no beating around the bush, no equivocation and no softening of the language: for years, Engler has used “progressive” publications to peddle his own vile brand of antisemitism.

Take Engler’s May 2016 article titled, “Why I am a bit wary when sports networks start speaking for the ‘Holocaust industry.’” It’s his response to a video feature that The Sports Network (TSN) aired the day before Yom HaShoah about Holocaust survivor Hank Rosenbaum’s story of survival — and Rosenbaum’s embrace of hockey in his adopted country of Canada.

Engler argues that this seven-minute video is intended “to defend the status quo and support the powerful against the weak.” He suggests that the video is symptomatic of the “Holocaust industry,” the Jewish establishment’s purported exploitation of the Holocaust “for economic and political gain and to further the interests of Israel.” Engler goes on to link the Rosenbaum feature to Israel advocacy, criticism of the leadership of the UK Labour Party’s Jeremy Corbyn and condemnation of Hugo Chavez’s government.

The entire article reads like the fever dream of a reprobate teenager who just finished reading Henry Ford’s “The International Jew.” Nowhere in the video is there any mention of Israel or Zionism. Not one.

Engler concludes the article on a conspiratorial note, chastising TSN for neglecting to mention that Rosenbaum is co-president of the Canadian Jewish Holocaust Survivors and Descendants group, which (gasp!) is affiliated with the Centre for Israel and Jewish Affairs. Engler also casts aspersions on the validity of Rosenbaum’s lived experiences, noting that he only began his Holocaust advocacy work after watching “Schindler’s List.” This final figurative kick in Rosenbaum’s groin serves as a fine accompaniment to the actual, physical kick in the groin that Holocaust survivor Thomas Hecht received in 2002 during the anti-Israel riots at Concordia University, which Engler helped incite.

This antisemitic article was not a one-off for Engler. Rather, it was emblematic of his larger body of work. Themes of Jewish over-representation in the political sphere, Jewish financial prowess and Jewish privilege feature prominently in Engler’s writing.

Consider his April 2016 Rabble article, “The most abused term in Canada today: Anti-Semitism,” in which Engler asserts that the term “antisemitism” is “primarily invoked to uphold Jewish and white privilege.” Engler bemoans the fact that “there is little discussion of Canadian Jewry’s actual place in Canadian society” and proceeds to rattle off the usual tired tropes about Jews in Western societies: “Among elite business, political and professional circles Jewish representation far surpasses their slim 1.3 per cent of the Canadian population. Studies demonstrate that Canadian Jews are more likely than the general population to hold a bachelors degree, earn above $75,000 or be part of the billionaire class.”

In his October 2016 article “Quebeckers and Jews share an empowered sense of vulnerability. And it’s not warranted,” Engler again cited these facts to dismiss the concept of modern-day antisemitismand to justify “Canadian Jewry’s empowered sense of victimhood.”

In his August 2014 article “Anti-Semitism as cover for white supremacy,” Engler labeled a Toronto protest against antisemitism “a march for white supremacy.” He noted that the “racially homogenous crowd carried Israeli flags,” and he recycled the same abovementioned facts about Canadian Jews and downplayed historical antisemitism in Canada.

During an unaired appearance on the Canadian Jewish podcast Treyf, Engler asserted that “antisemitism is of such insignificance that increasing something so insignificant is not that big a deal…more important to that is the bigger injustice of Palestinian rights,” eliciting pointed opposition from the hosts.

He expressed concern that “only 15%-17% of Jewish Montrealers live in intermarried (or common-law) households.”

So thank you, Engler, for confirming that Karen Rodman is, indeed, an antisemite.

Trump: Egypt Will ‘Blow Up That Dam. They Have to Do Something’

Re: UK amends status of Israel and Jerusalem following pressure from pro-Israel lobby