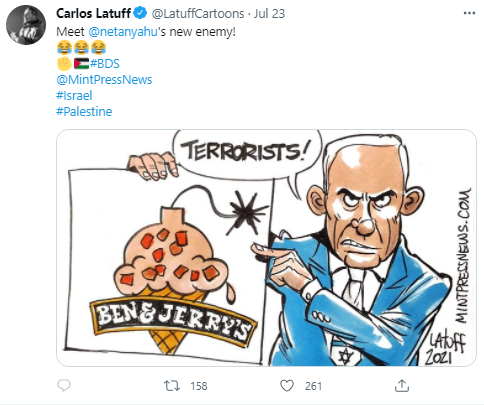 I think it is fair to say this cartoon from antisemite Carlos Latuff is most certainly a propaganda fail:

It seems Latuff never got the memo that Naftali Bennett – not Binyamin Netanyahu – has been Israel’s Prime Minister for over a month, and was the one who reacted to Ben & Jerry’s recent decision. Not only that, but Bennett did not call Ben & Jerry’s “terrorists” – new Israeli President Isaac Herzog got close to saying it when he said “The boycott of Israel is a new sort of terrorism, economic terrorism.” But not exactly.

Incidentally, this is all former PM Netanyahu has had to say about Ben & Jerry’s:

In other words, Carlos Latuff is not only an antisemite; he’s an ignoramus.

The puzzle of profitless growth in GCC firms

There is a puzzle in the profits of Gulf Cooperation Council...
Read more
Business

The AP has a report about twin palestinian Arab brothers who converted an old Boeing 707 into a cafe and restaurant. Good for...
Read more