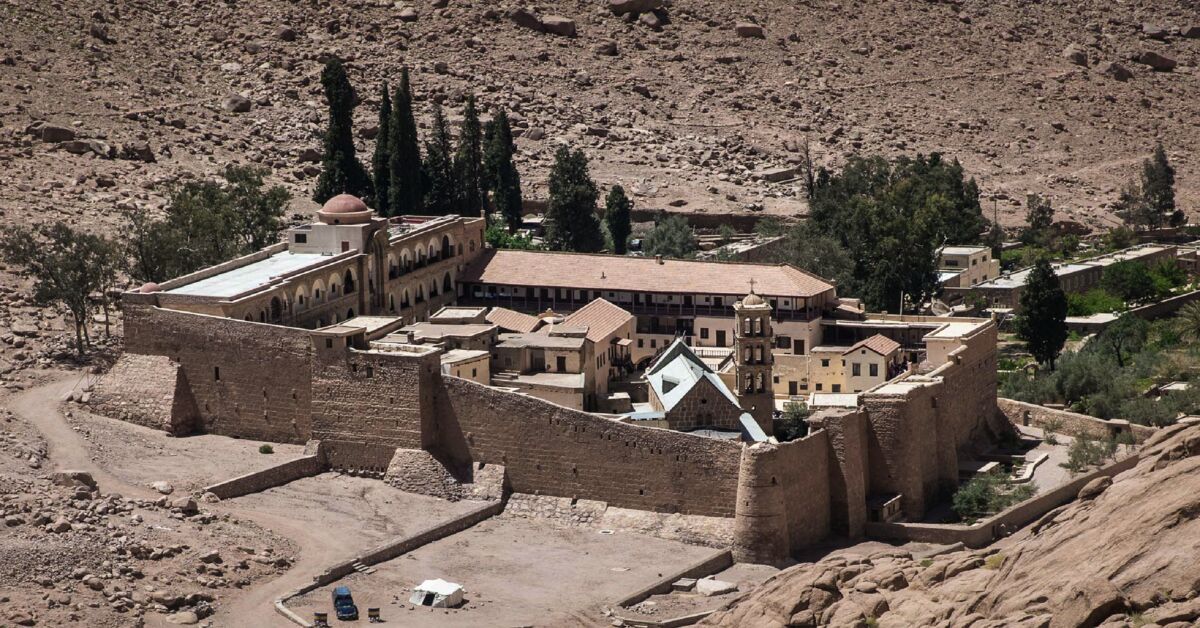 
Egypt is gearing up for the implementation of the first phase of the Greater Transfiguration Project to develop the famous ancient city of Saint Catherine in South Sinai.

During a March 30 meeting to follow up on the necessary preparations to start the implementation, Minister of Housing Assem el-Gazzar explained that the various projects to be implemented in the city have been designed to promote tourism there.

He stressed the need to establish bicycle and pedestrian lanes, all the while supporting plans to plant vegetation such as olive trees.

Gazzar indicated that the Ministry of Housing-affiliated Central Agency for Reconstruction will be in charge of implementing the first phase of the project, and the development projects are set to improve the urban environment of the city and provide many investment and job opportunities.

“It is a touristic city that is part of our heritage, and it serves as a meeting point for the three [Abrahamic] religions,” he added.

In August 2020, President Abdel Fattah al-Sisi had tasked the concerned government parties with initiating a study of the Greater Transfiguration Project, which he described as an added, spiritual value for all humanity.

South Sinai Gov. Khaled Fouda told Al-Monitor over the phone that the Greater Transfiguration Project aims to develop the city and its surroundings while preserving the environmental and visual character of its pristine nature.

The project, he said, also seeks to establish a spiritual shrine on the mountains surrounding the Holy Valley given the great position enjoyed by the unique city of Saint Catherine, where God Almighty unveiled himself.

Fouda said the city of Saint Catherine is located in South Sinai amid a mountain range, the most famous of which is Jabal Mousa, from where God Almighty spoke to Prophet Musa during his return to Egypt from Midian. There is also Mount Catherine, where the archaeological Saint Catherine’s Monastery, one of the oldest monasteries in the world, is located. This unique area serves as a destination for spiritual, mountain and therapeutic tourism.

Asked about the other objectives of the project, Fouda explained that it also aims to provide all kinds of touristic and entertainment services to visitors, while working on promoting the city in the world as a destination for spiritual tourism.

Saint Catherine, he explained, is a city that has a very great historical and spiritual value, as it serves as a crossroads for the three Abrahamic religions, and the project aims to link the city to the rest of the coastal area that includes al-Tur, Sharm el-Sheikh and Dahab.

Regarding the archaeological areas in Saint Catherine city, Fouda said development works will be conducted while preserving the sanctity of holy sites in the Holy Valley and protecting the nature reserve, as no buildings will be erected in these sites.

Asked about the places that will be restored as part of the project, Fouda said, “Some churches inside the monastery, such as the Church of Stephen and John, will be restored, and an automatic fire extinguishing and fire warning system will be put in place [at the monastery].”

The valley area near the monastery, he added, will also be developed and dotted with a suitable lighting system.

According to Fouda, electric poles will be removed from al-Silsilah Gate to the entrance to the monastery. The project, he said, will include the establishment of a gate to inspect bags and individuals, a security monitoring room and surveillance cameras throughout the monastery.

The works, he said, include four areas, including Jabal Musa and the Monastery Garden, which is set to become a special destination for tourists given its rare trees, three wells, three historical springs, honey apiary and olive press. These very criteria were among the criteria that led Saint Catherine to be included on the UNESCO World Heritage List in 2002.

Fouda explained that the governorate organized over the past five years a ceremony entitled “Here we pray together” in the presence of a large number of officials and ambassadors from 30 countries, which helped introduce the city of Saint Catherine to the world.

For his part, Deputy Minister of Housing for National Projects Khaled Abbas told Al-Monitor the project also aims to provide tourism and entertainment services to visitors, all the while linking the city to the rest of the coastal area, which extends over al-Tur, Sharm el-Sheikh and Dahab.

Abbas said work has started to internationally promote the city as a destination for spiritual tourism, stressing that the city of Saint Catherine has a great historical and spiritual value and is a crossroads for the three Abrahamic religions.

He also said officials from the company (which he did not name) tasked with promoting the city have started explaining the project promotion vision, which seeks to turn the city of Saint Catherine into a destination for spiritual tourism for followers of the three Abrahamic religions around the world.

He stressed that the mission of this project is to establish the principle of global peace among human beings, adding that the project will be promoted at the global level.

Abbas said similar projects will be implemented in other areas in Egypt, including the expansion of the Suez region urban area, the establishment of a business and finance entrepreneurship center in Ras al-Adabiya, and the Bab al-Khaleej project, which includes several international tourism projects.

Add to this, he continued, the development of tourist and heritage sites in Mount Sinai and their linkage to other tourist destinations, especially the city of Saint Catherine, the development of airports and ports, and the establishment of a zone to handle global exports as well as the new Suez City, among many other development projects.

In 2002, the city of Saint Catherine was classified as a World Heritage site upon a decision of the UNESCO Committee, being one of the most peculiar and distinct cities in Sinai, and the city was declared a natural reserve because of its natural, historical and religious significance.

The Monastery of Saint Catherine is located in the South Sinai governorate at the foot of Mount Horeb, where the Prophet Moses (peace be upon him) was given the Ten Commandments. This mountainous region includes many heritage and religious sites and has a breathtaking nature. It is sacred to the followers of the three Abrahamic religions, and Muslims call it Mountain Moses.

The monastery was founded in the 6th century AD in the Byzantine era and is the oldest Christian monastery that has preserved its religious function to date. Its importance lies in the fact that it is a model of Byzantine architecture containing large collections of valuable Christian manuscripts and icons.

Re: Pentecostal Zionists and their support for the illegal Israeli occupation