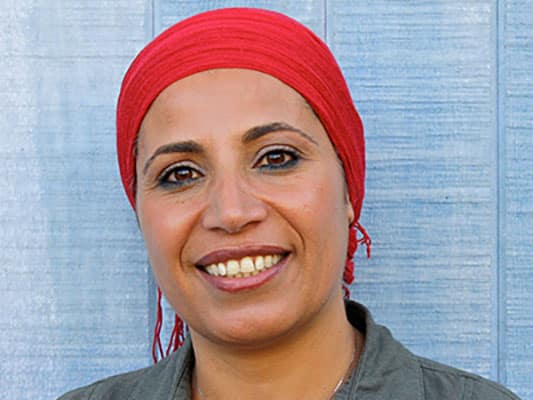 
Amal Elsana Alh’jooj grew up in a Bedouin village in the Negev. In the traditional Bedouin community, boys are favored over girls so according to her parents – as Amal reminisces – the arrival of a baby girl amounted to a near tragedy. Her mother and father were hoping that after four daughters, Amal would bring honor to the family by being born a boy. After this “failure,” her mother expected her husband to leave her, but instead he called the baby “Amal,” which is Arabic for “hope.” He did this in the hope that one day things would be different and that his wife would eventually give birth to a boy. His wife obliged. After Amal was born, her mother went on to have five boys.

In her own words, Amal grew up with the frustrating sense of inequality present in her culture. No one knew what to do with her. There were already enough girls to help out in the kitchen, so at five-years old, she was sent to shepherd the flocks alone. After grazing them she walked three kilometers to school and then rushed back to tend the flocks again.

Amal was empowered! She applied herself to her studies and at age 14, she was already tutoring other Bedouin girls of her tribe, those same literacy skills. At 17 she had already set up the first ever organization that championed for equality for Bedouin women.

She never looked back. She began her degree at Ben Gurion University and twenty years later, had earned a doctorate from McGill University in Canada.

Fluent in Arabic, Hebrew, French and English, Doctor Amal returned to Israel and set up a centre in the Negev for the economic empowerment of Bedouin women. The project seeks not to harm the tribal fabric of life and many traditional customs. With that, she is convinced that if 50% of any society is unemployed and not regarded as valuable, the society cannot be healthy.

Among her innovative ideas she espouses via the organization, is the training of single mothers to run small businesses such as restaurants, manufacturing jewelry and fashion design. Her most unconventional and original initiative to date is offering a DJ course. One of her most important projects is the mobile book library for Bedouin children in desert communities because Amal knows that literacy is the key to empowerment.

Honest to the core and having gained great respect from all communities, she also works to bring to the attention of the Israeli authorities, the ghastly culture of Honor Killings. Reluctant to intervene with Bedouin affairs, the Israeli authorities, tend to neglect this crime, putting it down to an immutable trait and fact in Bedouin culture. Amal wants them to see it for a horrendous crime that can be stopped. Unabashedly she says that if Honor Killings happened in Jewish society, there would be no excuses and the perpetrators would pay for their crimes.

It’s been a long road for Amal. She has encountered opposition from all sides for challenging people’s comfort zones, but her hard work paid off. In 2005 she was one of 1000 women nominated for the Nobel Peace Prize and has deservedly been listed as Woman of the Year by two very influential Israeli magazines.

Erdogan distracts from plummeting lira with call to boycott France