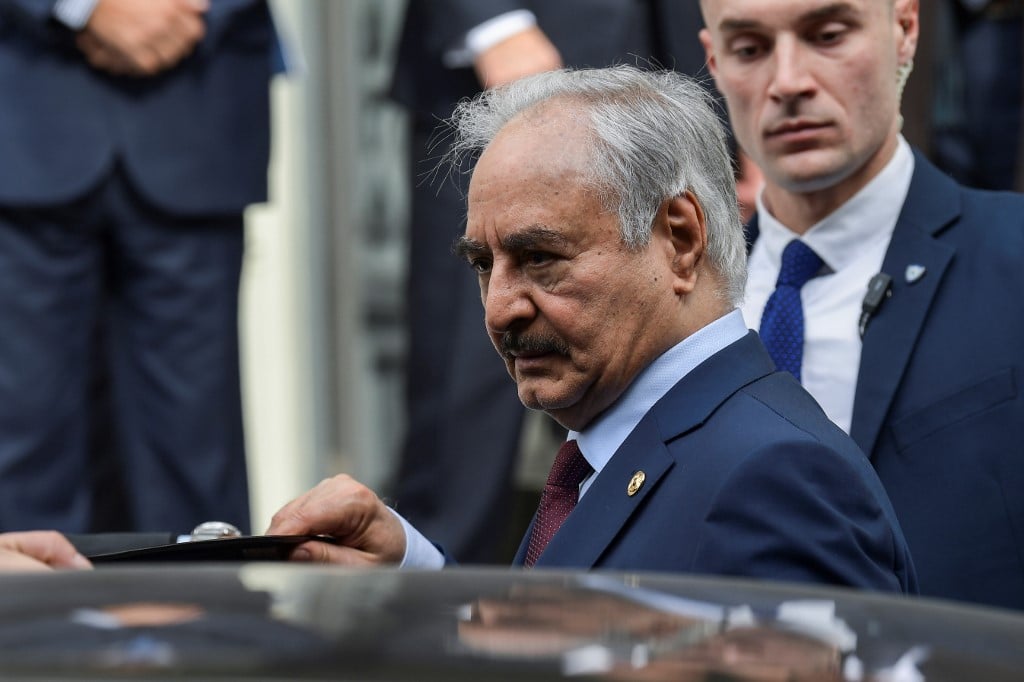 The newspaper reported on Monday that the plaintiffs are targeting US assets worth millions of dollars owned by Haftar and his family as compensation for his alleged involvement in war crimes.

Most of the 17 Haftar-linked properties targeted are owned by limited liability companies (LLC) controlled by his son Okba Haftar, the WSJ reported.

The LLC with the largest number of properties is Eastfield Holdings, with around 10 properties worth about $4.5m, according to the WSJ.

Haftar and the PR firm: Ex-UK diplomat was involved in plan to improve Libya warlord’s image

One property, a 5,600 square-foot house in Great Falls, Fairfax County, is valued at nearly $2.5m, according to state business licenses and property records, while public records also list a condo in Falls Church, Virginia as well as a three-bedroom ranch in the same state.

As recently as July, Haftar’s son reportedly purchased a $700,000 horse farm in the small town of Boyce, Virginia, which has a population of 589 people, according to a 2010 census.

The plaintiffs’ lawyers are also targeting a pedigree Arabian show horse that has competed in international competitions in France and the United Arab Emirates.

The horse’s registered name is “Saddam Kh. Belgasim Omer”, a combination of the names of Haftar’s sons Saddam and Belgasim, according to a public database of horse ownership.

The key arguments that lawyers are pushing rest on Haftar’s long-time residency in the US and ownership of assets there, two facts which prosecutors say are sufficient grounds for granting Virginia state jurisdiction over Haftar’s alleged war crimes in Libya.

After Haftar failed in a coup attempt against Libyan leader Muammar Gaddafi in 1987, he arrived in the US with his family – including his sons Khalid and Saddam – and eventually became an American citizen.

After more than two decades in the US, Haftar returned to Libya when Gaddafi was ousted and killed in a Nato-backed uprising.

Lawyers are resting their arguments on the Torture Victim Protection Act of 1991, which allows for non-US citizens to seek damages from individuals who, acting in an official capacity for any foreign nation, have allegedly committed torture or extrajudicial killings. Multiple Libyan families have filed lawsuits against Haftar over the past couple of years: two filed in Virginia and one in Washington, for alleged war crimes, accusing the US national of murder, starvation and torture among other charges.

In one suit, a family was forced to take shelter from Haftar’s forces’ bombings in an unoccupied apartment in the suburb of Ganfouda, where they ate tree bark and grass and drank water from puddles in order to survive.

Haftar initially did not respond to the suit, but after facing the possibility of a default judgment, he hired lawyers for his defence. His legal team claims the Libyan commander is immune from prosecution since he should be treated as a head of state.

However, Thursday’s claim says Haftar cannot “rely on any invocation of sovereign immunity as he is not recognized as a head of state”.

Instead, the lawsuit argues that he is subordinate to the Tobruk-based House of Representatives.

On Monday, the country’s UN envoy expressed optimism about talks held in Tunisia between Libya’s rival sides, which came on the back of a joint ceasefire agreement.

My previous post may not have dealt with the propaganda fail I originally thought it was (although definitely pathetic propaganda) I think it is...
Read more
Business

This piece is part of the series “All About China”—a journey into...
Read more