Algeria: Minister tells people to leave if they disagree with constitutional amendments 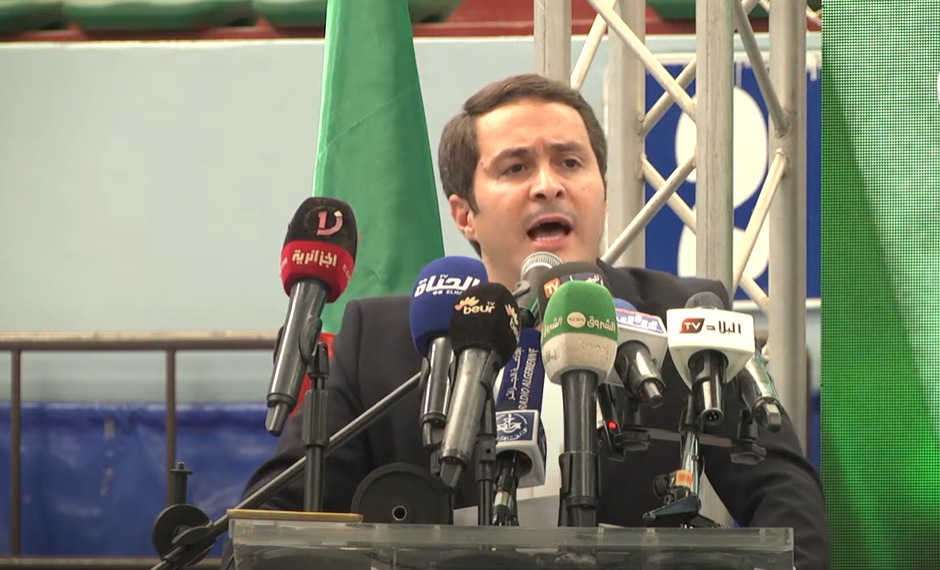 
The Algerian minister of youth and sport has come under fire for making “unacceptable” remarks during the final week of campaigning ahead of next month’s referendum on proposed constitutional amendments.

“We will build a state in accordance with the declaration of 1 November (the day Algeria began its war of liberation from France); a democratic and social state within the framework of the principles of Islam,” Sid Ali Khaldi declared on Thursday.

“For the first time since independence, we have constitutionalised the declaration of 1 November and whoever is not happy can change countries,” he said, twice reiterating the sentiment.

Many Algerians soon took to social media to criticise the minister’s speech, describing his words ahead of the 1 November vote as “serious” and “undermining national unity”.

The hashtag “I don’t like the situation” began trending, in reference to the amendments, which have been presented as a roadmap to steer the country away from authoritarianism and appease popular demands for change.

The draft amendments will keep in place most of the existing constitution’s “general principles”, including Islam remaining the religion of the state.

They will also seek to make small changes to the system of decentralisation, the role of the army and the judiciary – although the president will still retain significant influence over the courts through appointments and the control of specific institutions.

A number of Algerians have said they will boycott next month’s vote, believing the reforms proposed will fail to materialise, in much the same way previous constitutional amendments have failed to honour people’s democratic demands.

Translation: I’m still shocked by this shitty minister who talks about Algeria as private property, asking us to leave the country if we’re not happy. I’ve broken out in a cold sweat

Translation: [To Prime Minister Abdelaziz Djerad] I hope that your Minister for Youth and Sports will be called to order and will apologise to Algerians. What right does he dare have to tell those who have an opinion different from his own that they must leave the country? Shameful and irresponsible

Other internet users expressed their willingness to leave the country if the borders, which have been closed since Algeria reported its first coronavirus case in March, were opened and they could get a visa.

Translation: They’ve closed the borders by air, sea and land and he says change [your] country, yes I don’t like the solution – so open the borders

Translation: Make it easy for us to go and stay [here] by yourself

As the country continues to grapple with a weak economy and high unemployment, exacerbated by the coronavirus pandemic, growing numbers of Algerians are attempting to depart illegally from the country’s shores – more than three times the number compared with last year.

This month alone, six boats carrying 73 Algerians were intercepted by authorities in Spain’s Murcia region, who reported that Algerians accounted for nearly two-thirds of the numbers attempting to reach the Spanish coastline.

Khaldi’s comments demanding Algerians leave if they reject the state’s political roadmap are not the first time the country has been told to accept the take-it-or-leave approach.

Former commerce minister Amara Benyounes famously told the public in 2014 “curse you, if you don’t love us”, on the eve of the presidential election which saw Abdelaziz Bouteflika secure a fourth term in office.

Khaldi’s remarks come on the back of another controversy this week which saw a teacher in the western city of Oran humiliated by the city’s wali [governor], Messaoud Djari, who dismissed her concerns over conditions at the Benzerdjeb Primary School.

“When we alert [authorities] to our situation, we are told ‘we can’t do anything, we don’t have the budget’,” the teacher, Sidia Merabet, told the wali in front of television cameras on Wednesday.

Merabet went on to describe the situation at the school, where she has taught for 32 years, as “catastrophic”, describing the students’ desks as dating back to “the [French] colonial era” and adding that the “parents of students studied on these tables”.

Djari turned his back on the teacher and left, after taking offence at the teacher’s comments, causing an outcry on social media, and sparking anger from national education unions who demanded a public apology.

The wali’s office released a statement stating that Djari “followed with great interest the presentation of the professor” but “was forced… to clarify as a representative of the state that this was an inappropriate description, and that it reflected neither the reality, nor the efforts made by the Algerian state since independence in all sectors, and above all the sector of national education”.

Prime Minister Abdelaziz Djerad was quick to react, expressing his “categorical rejection” of “the humiliation of a teacher who defends the future of our children”.

“I thank the teacher, Sidia Merabet, of the Benzerdjeb School in Oran, who has unmasked the old practices,” the prime minister wrote on his Facebook account, promising to replace the old equipment used in schools across the country.

Djerad travelled to Batna on Wednesday, as five million primary school students returned to classes following seven months of nationwide school closures as part of measures to contain the spread of the virus.

To mark the event, the prime minister announced a plan to equip all schools with tablet computers, and for students to wear a school uniform in order to combat “social disparities”.

However, the announcement to modernise schools has drawn criticism from education bodies, teachers and unions, who have highlighted how schools across the country often lack the most basic resources for teachers and students, with disparities in educational institutions from region to region.

Pictures shared online frequently expose the poor transport conditions for students in certain regions, the frugality of meals in school canteens, and unsanitary and overcrowded classrooms – despite the government devoting a significant part of its budget to the education sector.

A Qatari athlete and an Italian one are being praised for agreeing to share a gold medal at the Olympics.  On Sunday, Qatar’s Mutaz...
Read more
Sport

Saudi judoka Tahani Al-Qahtani learned her first round opponent in the Tokyo Olympics would be Raz Hershko of Israel, a country with which...
Read more
Sport

The 3-0 victory over China by Turkey's “Sultans of the Net,” the national women’s volleyball team, on July 25 at the Tokyo Olympics lifted national...
Read more

Re: Saudi condemns French cartoons abusive to Muslims, but does not support boycott

US elections 2020: Arab Americans stream to the polls to elect a new president