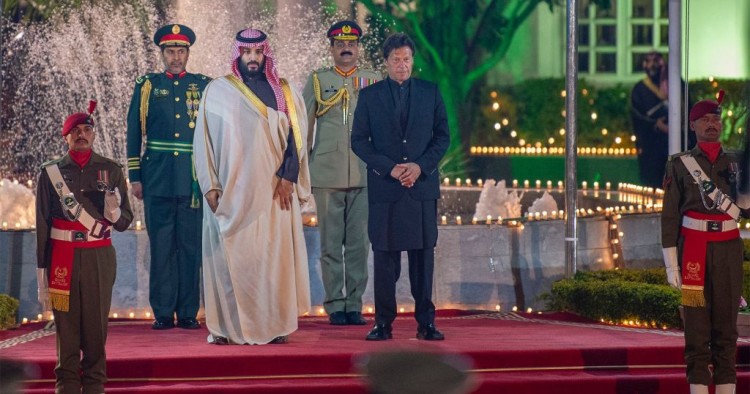 Riyadh has reportedly opted not to withdraw the final tranche of its $3 billion loan. Islamabad has repaid $2 billion so far. There’s also renewed talk of an Aramco oil refinery and petrochemicals complex in the Pakistani port city of Gwadar. And last month, Pakistan’s Foreign Office issued what was effectively a statement of support for the Saudi leadership after the release of the declassified U.S. intelligence report on the assassination of Saudi journalist Jamal Khashoggi.

Despite the improving trajectory of Saudi-Pakistan relations, the bilateral reset will be limited to modest economic and military cooperation. The strategic drift between Islamabad and the two Gulf Cooperation Council (GCC) heavyweights, Abu Dhabi and Riyadh, will continue as the Pakistan-Turkey partnership grows and both Saudi Arabia and the United Arab Emirates (UAE) bolster economic and security ties with Pakistan’s archrival India.

From 2018 through most of 2019, it seemed as if Pakistani Prime Minister Imran Khan and Saudi Crown Prince Mohammed bin Salman (MbS) had a budding friendship.

As Khan came to power in the summer of 2018, a Saudi economic aid package was already in the works — partly the result of the Pakistan Army’s military diplomacy. In October 2018, Khan returned to Saudi Arabia for the second time in as many months at the personal request of MbS to attend his Future Investment Initiative conference, shoring up the high-profile attendee roster as others canceled in the wake of the Khashoggi murder. The first $1 billion tranche of the $3 billion loan package was delivered the next month. Abu Dhabi, Riyadh’s copartner in the region, followed with a comparable aid package.

By the time MBS visited Islamabad in February 2019, with dozens of Saudi businessmen as part of his delegation, the discussion had shifted toward investments. The crown prince left with a pledge of over $20 billion in Saudi investments, including renewable energy projects as well as the aforementioned Aramco facility.

But geopolitics brought the Khan-MBS bonhomie to a sudden end. In August 2019, India effectively annexed the disputed region of Jammu and Kashmir under its control. Given the enormity of the move, Pakistan expected support from both Saudi Arabia and the UAE, which are seen as longtime partners and brotherly Muslim countries. But top diplomats from both countries made a joint visit to Islamabad in September that was more aimed at tempering Pakistan’s expectations than offering tangible solidarity.

As Abu Dhabi and Riyadh distanced themselves from the Kashmiri cause, leaders in Ankara and Kuala Lumpur became more outspoken on behalf of Kashmiris and began to align with Pakistan’s diplomatic position on the dispute. The trio also flirted with the notion of an Islamic bloc. An Islamic summit hosted by Malaysia in December 2019 would be its first big event.

Then-Malaysian Prime Minister Mahathir Mohamad described Indonesia, Malaysia, Pakistan, Qatar, and Turkey as the summit’s “pioneers,” giving the impression that it was an alternative to the inert, Saudi-dominated Organization of Islamic Cooperation (OIC). Leaders in Abu Dhabi and Riyadh were infuriated. Days ahead of the summit, Khan went to Saudi Arabia and Gen. Qamar Javed Bajwa, Pakistan’s powerful army chief, visited the UAE to cool the flames. Pakistan backed out of the summit. But this was not enough of a concession to placate the two GCC powers.

Given its conventional military disparity with India, Pakistan sees international diplomatic support as vital to getting India to the negotiation table. So it persisted in pressing for the Saudi-led OIC to convene a session on Kashmir at the foreign minister level. At the same time, Pakistan’s partnership with Turkey continued to grow. In February 2020, Turkish President Recep Tayyip Erdoğan made a state visit to Islamabad, addressing a joint session of the Pakistani parliament. Pakistan also pursued efforts to enhance border cooperation and trade with Iran.

By mid-2020, Riyadh had enough. In July, Pakistan was forced to begin repaying the short-term loans provided by Saudi Arabia. The rift became public when Pakistani Foreign Minister Shah Mehmood Qureshi lashed out against the Saudis on a local news channel. And it was clear that the Khan-MBS friendship was over.

The drift began much earlier

In reality, Pakistan and Saudi Arabia had already been growing apart for more than a decade. The Saudis were not fans of the Pakistan Peoples Party-led coalition government that ruled from 2008-13. An old friend of the Saudis, Nawaz Sharif, returned as prime minister for the third time in 2013. The Saudis had a long relationship with Sharif’s family and helped broker an exile deal after he was deposed and imprisoned in 1999.

In 2014, Riyadh provided a $1.5 billion loan to Sharif’s government. But in 2015, Sharif shocked the Saudis with his (wise) refusal to join their Yemen war. Pakistan’s parliament also unanimously passed a resolution calling for their government’s neutrality in the Yemen war.

Meanwhile, the Sharifs had begun to move on to other power brokers in the region: Qatar and Turkey. Nawaz and his brother Shehbaz —who ruled the Punjab province from 2008 to 2018 — cultivated a relationship with Turkey’s Erdoğan, attracting both aid and investment.

At the same time, the Saudis, as well as the Emiratis, continued their wooing of India, which was kickstarted with the 2006 Delhi Declaration signed by King Abdullah and Prime Minister Manmohan Singh. New Delhi and Riyadh have since signed a defense cooperation pact and formed a strategic partnership council. Security cooperation has steadily grown, including in counterterrorism. Saudi Arabia has extradited several militants from Pakistan-based groups such as Lashkar-e Taiba, including Sayed Zabiuddin Ansari in 2012.

In the ensuing years, Pakistani sensitives have mattered less in efforts by Abu Dhabi and Riyadh to expand ties with New Delhi. In March 2019, India’s then-External Affairs Minister Sushma Swaraj attended the OIC foreign ministers’ meeting in Abu Dhabi as a guest of honor — just days after India-Pakistan clashes that saw at least one Indian fighter jet shot down. Pakistan’s Foreign Minister Qureshi boycotted that year’s summit. This past December, the Indian army chief visited Saudi Arabia and the UAE — the first visit of its kind.

Both Saudi Arabia and the UAE see India as far more vital to their eastward push. Simple economics explains why. In 2018, India imported $21.2 billion in crude oil from Saudi Arabia; Pakistan imported $1.9 billion. Saudi companies are not only keen on exploiting India’s growing energy needs, but have invested in a broad range of sectors, including agriculture and telecommunications.

For its part, Pakistan is not sitting by idly. Alongside its budding relationship with Turkey, Pakistan appears to be building ties with Qatar. Doha and Islamabad recently concluded a revised LNG deal that was brokered in part by the Pakistani army chief. The new terms can be seen as relatively generous. Pegged at 10.2% of Brent crude oil, it’s lower than the rate offered to Bangladesh. Other concessions bring the effective rate down to 10.13% of Brent. Pakistan’s Business Recorder suggests the LNG agreement is part of a “package deal,” with labor and defense agreements to follow. Doha and Islamabad are also coordinating on the Afghan reconciliation process. Should Doha and Islamabad begin to build a strategic partnership, one might see the Pakistan-Turkey entente bolstered by Qatari capital.

Last year’s crisis in relations with Saudi Arabia should provide a series of lessons for Pakistan’s power brokers.

One, history matters little in the bilateral relationship today. Former Saudi intelligence chief Prince Turki bin Faisal once described ties between Pakistan and Saudi Arabia as “probably one of the closest relationships in the world between any two countries without any official treaty.” That era, however, has come to an end. Some royals close to Pakistan, such as former Crown Prince Muqrin bin Abdul Aziz, have been sidelined. In the era of MbS, Riyadh is more inclined to ask, “What have you done for me lately?”

Two, it’s safer to assume that Saudi aid, now more than before, comes with a price. And if Pakistan is unwilling to pay that price — fighting in Saudi Arabia’s wars and shunning its rivals — then it may be best to avoid seeking economic assistance from the Saudis.

Three, Pakistan must push forward with reforms that facilitate foreign direct investment, including from Saudi Arabia. The Saudis were intent on making large-scale investments in Pakistan in 2019. But the government of Pakistan simply was unprepared to realize those proposals. Haroon Sharif, a former chairman of the Pakistan Board of Investment, identifies a number of reasons why the proposed Saudi projects failed to take off, including Pakistan’s “weak technical capacity to undertake commercial transactions.”

Finally, and this will be no surprise for many readers, Pakistan’s military matters most to the Saudis when it comes to the bilateral relationship. The two countries will continue defense cooperation, including joint exercises and training missions. But such engagements are unlikely to translate into renewed strategic alignment between Riyadh and Islamabad. A sounder approach for Pakistan is to retain goodwill among the Saudis, make the necessary reforms to become an attractive investment destination, and work on more viable strategic partnerships elsewhere in the region.

In Iraq, War and Marriage Are Frequent Obstacles to Education