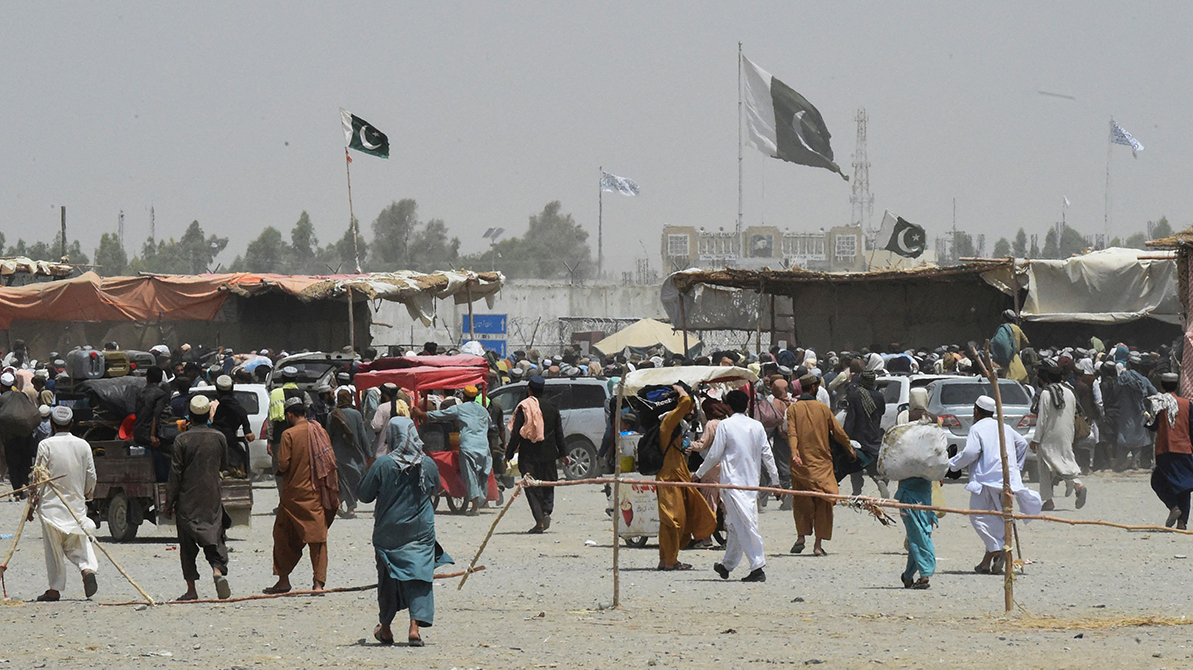 
The US withdrawal from Afghanistan is not yet complete, but Afghanistan’s neighbors are already contending with its fallout as they face the immediate spillover of the conflict into their respective territories.

The insurgency has reached the borders of all of Afghanistan’s neighbors, who are choosing to both engage the Taliban while also bolstering defensive and deterrent measures to contain the insurgency.

While the net loser in all this is the Afghan state, the Taliban may be overplaying their hand. Should they rule most of Afghanistan, they could end up governing an isolated country deprived of the foreign aid it needs to function.

From an insurgency to a state

Earlier this month, as Afghan President Ashraf Ghani addressed a conference in Uzbekistan on regional connectivity, his government was literally being disconnected from the region.

Since June, the Taliban have taken control of seven out of Afghanistan’s 14 official border crossings, including Spin Boldak and Islam Qala, which are, respectively, along the borders with Pakistan and Iran. Afghan soldiers and refugees have also fled to neighboring Pakistan, Uzbekistan, and Tajikistan.

Several of the captured border crossings include major customs facilities, providing the Taliban with additional sources of revenue. But perhaps just as important as the cash control of these posts may generate is the de-facto legitimacy it could give the Taliban.

Talk of regional integration has revived once again — driven by Afghanistan’s neighbors Uzbekistan and Pakistan. But regional policy toward Afghanistan will be driven by narrower, more fundamental interests: ensuring border security, the protection of kin or affinity groups, and the free flow of goods while also minimizing the inflows of refugees. As a result, Afghanistan’s neighbors may have little choice but to engage the Taliban as the de-facto authorities on the other side of the border.

The Taliban’s sweep of many Afghan border crossings reflects a strategic acumen that has been maturing to some degree. The annex of the Doha accord signed with Washington purportedly bars the group from attempting to take over provincial capitals amid the U.S. withdrawal. But the capture of border crossings provides an alternative method for the Taliban to assert a state-like status, gain political and diplomatic leverage over the Kabul government, and, at the same time, preserve the accord with the United States.

There is also a psychological dimension to the Taliban’s rush to the borders. It diminishes the Ghani government’s standing, weakens its mandate, and creates the perception that a nationwide Taliban takeover is inevitable. This, of course, has an impact on the will of local Afghan security forces and powerbrokers to continue the fight. Many are opting to bow out or side with the Taliban.

The Taliban, who have continued to refer to themselves as the “Islamic Emirate of Afghanistan” since their ouster after 9/11, now control over 50 percent of Afghanistan’s district centers, according to the U.S. military. Combined with the control over borders, that means the Taliban’s imagined emirate is once again closer to reality, but by no means inevitable.

Regional states are at the very least uncomfortable with a Taliban-dominated Afghanistan. But they may ultimately have no choice but to engage whoever is the de-facto power on the other side of the border. They continue to support the Afghan government, but are steadily increasing their outreach to the Taliban.

This month, Iran hosted talks between the Taliban and elements of the Kabul government. At the same time, members of the Islamic Revolutionary Guards Corps-run Fatemiyoun militia, composed of Afghan Shi’a Muslim fighters, continue to trickle back into Afghanistan. Given their relatively modest numbers, they may at best serve to resist Taliban advances in the predominantly Shi’a, ethnic Hazara regions in central Afghanistan.

A statement released by the Fatemiyoun in July celebrated the “defeat” of the United States in Afghanistan, while also calling for intra-Afghan dialogue and avoidance of a sectarian war, suggesting that the group and its Iranian backers would like to explore a political understanding with the Taliban that preserves the religious autonomy and political rights of Shi’as.

Iran, an initial backer of the post-Taliban republic, has provided tactical support to the militant group for many years as a means to bloody the U.S. and induce its exit from the region. Like Moscow, Tehran might also see the Taliban as a counterweight to the more radical so-called Islamic State (ISIS).

But Iran’s multifaceted Afghanistan strategy — meticulously deconstructed by scholar Barnett Rubin last year — gives it the flexibility to recalibrate its tactical partnerships. It has cultivated assets within the Taliban and maintains historic relations with anti-Taliban Shi’a and Persian-speaking power brokers. As the U.S. completes its exit, Iran could tilt more toward the anti-Taliban resistance or deepen engagement with the Taliban. Its behavior will be shaped by the Taliban’s strength and its treatment of Shi’a minorities.

Afghanistan’s northeastern neighbor Tajikistan has softened its characterization of the Taliban, no longer referring to it as a terrorist or extremist group. But in response to recent Taliban advances, Dushanbe held its largest military exercises ever this month and has deployed 20,000 reservists to the border. Tajikistan says it is prepared to host upwards of 100,000 refugees. In August, it will host trilateral military exercises with Russia and Uzbekistan.

Moscow, which has hosted numerous Taliban delegations, intra-Afghan dialogues, and multiparty talks on Afghanistan, will also help construct a defensive outpost on Tajikistan’s border with Afghanistan. Russia’s largest military base on foreign soil is in Tajikistan. Moscow has been keen to see a U.S. military withdrawal from the region, but there is indication it may have begun to soften its stance, reportedly offering the U.S. access to regional bases for limited intelligence purposes.

The unfolding situation in Afghanistan has provided Uzbekistan with both opportunities and risks. Under the presidency of Shavkat Mirziyoyev, Tashkent has sought to open itself to the region and build relations with the U.S. In pursuit of both objectives, it has received Taliban delegations and offered to host intra-Afghan talks. Uzbekistan is also aggressively pitching itself as an anchor for regional trade, but peace in Afghanistan is a prerequisite for meaningful economic trade with South Asia.

As Turkmenistan quietly received a Taliban delegation this month, it also strengthened its military presence along the border with Afghanistan. This was the second visit by Taliban officials this year. In the previous visit, the insurgent group affirmed its support for regional connectivity projects, including the Turkmenistan-Afghanistan-Pakistan-India gas pipeline.

Turkmenistan, like Uzbekistan and Tajikistan, may be influenced by Taliban treatment of their ethnic kinsmen. But the Taliban’s composition in northern Afghanistan is taking on a multiethnic form. This could mitigate concerns about the fate of non-Pashtun minorities in Afghanistan.

Relations between Islamabad and Kabul continue to deteriorate. Pakistan is among the many actors that have been trying to salvage the fledgling intra-Afghan talks. Its attempts to convene an all-Afghan gathering in Islamabad appear to have been scuttled by Kabul.

But a terrorist attack targeting Chinese workers in northern Pakistan this month has renewed the sense of urgency with which Beijing and Islamabad view the need for a negotiated settlement in Afghanistan. In the wake of the attacks, Beijing and Islamabad have called for a “comprehensive cease-fire” and, according to the Chinese Ministry of Foreign Affairs spokesperson, “decided to conduct joint action on the Afghan issue in a bid to prevent Afghanistan from descending into a full-scale civil war.” On Wednesday, July 28, Chinese Foreign Minister Wang Yi received a senior Taliban delegation — a move seen by some as a power play by Beijing or an endorsement of the Taliban. In reality, the visit reflects Beijing’s growing anxiety about a security vacuum in Afghanistan after the U.S. withdrawal. Tellingly, Beijing reiterated its hope that the Taliban make a “clean break” with terrorist groups.

China and Pakistan regard the U.S. withdrawal as precipitous. Like Iran, they seek a U.S. exit from the region, but only after a broad-based political settlement is in place.

Pakistan’s relationship with the Afghan Taliban has become more complicated since the late 2000s with the emergence of the anti-state Pakistani Taliban and the growing independence of the Afghan Taliban. The Afghan insurgency provides Islamabad with a counterweight to a government in Kabul it sees as hostile, but the relationship no longer fits the patron-proxy categorization. Indeed, the tables have turned. It is the Afghan Taliban who have “strategic depth” in Pakistan — both physically and ideologically. Pakistani army chief Gen. Qamar Javed Bajwa recently told a gathering of parliamentarians that the Afghan and Pakistani Taliban are “two sides of the same coin.” An outright Taliban victory will embolden proponents of Talibanism in Pakistan.

In addition to weakening Indian influence in Afghanistan, Pakistan will need the Afghan Taliban to counter ISIS and keep the Pakistani Taliban and al-Qaeda in check. Whether the Taliban really possess the will to do to the latter is unclear.

Pakistani intelligence has at times pressed the Afghan Taliban to come to the negotiation table. But, even as Islamabad has broadened diplomatic outreach to anti-Taliban political forces in Afghanistan, it may feel that it can ill afford to go against a force that, in the words of a top U.S. military official, has the “strategic momentum” in Afghanistan.

A fleeting victory for the Taliban?

Combined with their territorial gains, treatment as a de-facto sovereign actor will boost the Taliban vis-à-vis other Afghan parties, much like the U.S.-Taliban accord. Given that the Afghan Taliban are creating their own facts on the ground at will, if there is to be reconciliation in Afghanistan, it will likely be on the Taliban’s terms.

A future Afghan state, if there is a cohesive one, may end up resembling more of an emirate than the present republic. But donor governments and organizations have the choice to not provide non-humanitarian assistance to a Taliban-ruled Afghanistan. And they are unlikely to fund a government that bars girls from schools and women from the workplace.

The Taliban’s refusal to allow Turkey to maintain command over Kabul airport security could also result in the shuttering of foreign embassies and the suspension of their respective aid programs.

The militant group’s battlefield gains have forced a tacit acceptance of it by regional states and global powers. But should the Taliban seek all-out victory on the battlefield and the forceful reimposition of an unreconstructed Taliban regime, they will find that Afghanistan’s neighbors will harden the fortifications along their borders.

Indeed, the Taliban may end up getting their emirate — but it will be a walled emirate, closed off from the world. Its longevity will be questionable as the Taliban will find holding territory to be difficult as they struggle for the expertise and resources to govern Asia’s poorest country.

The puzzle of profitless growth in GCC firms

There is a puzzle in the profits of Gulf Cooperation Council...
Read more
Business

The AP has a report about twin palestinian Arab brothers who converted an old Boeing 707 into a cafe and restaurant. Good for...
Read more