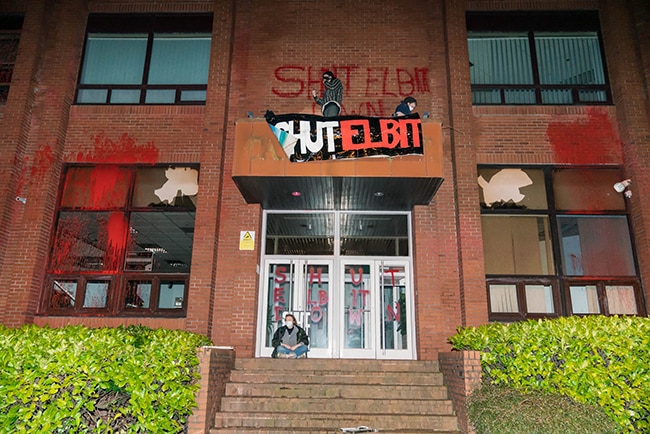 
A group of UK Israel-haters from the groups Palestine Action and Extinction Rebellion have blocked the entrance of the Elbit Ferranti factory in Waterhead and vandalized it.

What’s more, they filmed themselves committing the crime.

They were reportedly arrested, and it is, as of now, unclear if they will be charged or face any real legal consequences.

Extinction Rebellion admit not everyone appreciates their actions.

And here’s the thing. Extinction Rebellion describes itself as “an international apolitical network using non-violent direct action to persuade governments to act justly on the Climate and Ecological Emergency.” And on Facebook, they’ve categorized themselves as an “Environmental Conservation Organization.”

What causes a so-called “environmental conservation organization” to do things decidedly bad for the environment, like shattering windows and spilling paint everywhere?

Here’s a possible clue: The UK is one of the largest arms exporters in the world, yet somehow these goons chose to attack the Jewish factory.

To paraphrase Golda Meir, peace will come when the haters will love the environment more than they hate us.

In the meantime, while we can hope justice is served, we can also be proactive. These jokes want others to boycott Elbit, so let’s fight fire with fire (only, unlike them, with no people AND property harmed). Let’s make sure these thugs are boycotted.

While most of the vandals wore masks, this one either didn’t get the memo, or is just more of a dumbass than the others.

Drew Robson, this is your life.

Let’s ensure any future potential employers know who they are – although I suspect job-hunting is not their strong suit.

Biden unlikely to turn back in Iraq