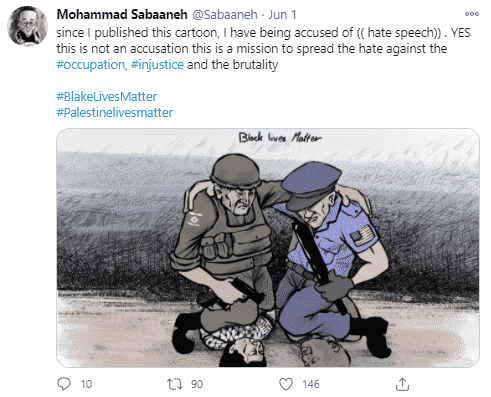 
Mohammad Sabaaneh is a palestinian Arab cartoonist, whose work got a fair bit of airplay following the death of George Floyd. Many of you have probably come across this cartoon of his

Note how he complains he is accused of ((hate speech)) – a reference to hate speech against Jews – but claims he is only against the “occupation.”

Sabaaneh would take us all for fools; here is how he depicted an Israeli soldier in one of his Christmas (co-opt) cartoon just published by Quds News Network

Yeah, he can’t hide his contempt for the Jewish people.

It doesn’t end there either. A look at some of his other “work” reveals some pretty gross imagery and dehumanization of Jews that wouldn’t have looked out of place in Der Stürmer.

Of course, he still claims he is “only” criticizing Israel, but even then, he’s not very good at hiding the fact he means Jews and Judaism

Meanwhile, those following his antisemitic work on Twitter include a who’s-who of Israel-hating scum and villainy, including

his writer Asa Winstanley, who also denies being antisemitic

a JVP member who has also written for him

the palestinian mission to the UN

and even the British Consulate in Jerusalem

I hope, at least in that last case, they are following him as part of efforts to monitor online antisemitism.