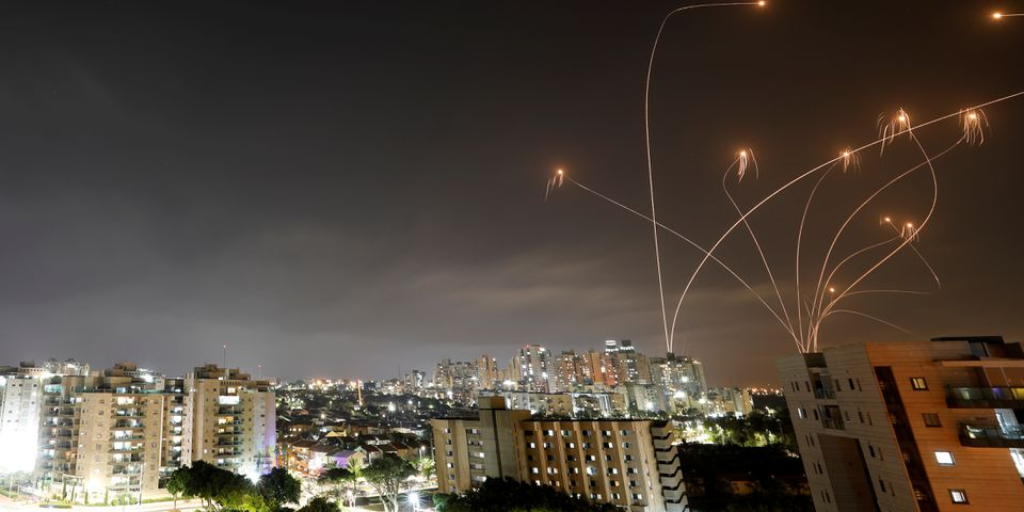 Hundreds of air strikes in Gaza carried out by Israeli forces and multiple rocket barrages fired towards Tel Aviv and Jerusalem by Hamas and other Palestinian militants on Wednesday have led to the deaths of at least 32 Palestinians in Gaza and five Israeli people, according to Reuters.

The Israeli forces’ aerial bombardment of Gaza caused the collapse of buildings, and were allegedly carried out to target residences of Hamas leaders and rocket launch sites. Several Hamas intelligence leaders are alleged to have been killed early on Wednesday as a result. Palestinian health authorities, however, say that the strikes killed civilians, including nine children.

Meanwhile, videos shared on social media show sirens sounding in Tel Aviv as rocket fire from Gaza filled the sky, intercepted by the Israel’s ‘iron dome’ defense system. Israel’s parliament in Jerusalem was reportedly evacuated due to the rocket fire. Israel claims more than 1050 rockets and mortar shells were fired towards it by militants in Gaza. Israeli media has reported that among the Israeli civilians killed by the rockets are a man and his daughter outside of the city of Lod.

The events of the past few days are believed to have been the most intense in the area in at least five years. Israeli Prime Minister Benjamin Netanyahu has introduced a state of emergency in Lod after reports of escalating violence between Israeli and Israeli Arab residents (those who are Palestinian by heritage yet have Israeli citizenship.)

Violence is unfolding in cities across various areas. According to Reuters, a popular fish restaurant in the coastal city of Acre has allegedly been set on fire, whilst in Jaffa, just outside of Tel Aviv, Arab protestors clashed with police who fired stun grenades in response.

The events of the past 24 hours follow the death of 26 Palestinians and two Israeli women on Tuesday due to Israeli air strikes and rockets fired from Gaza. The bombardments came after violent confrontations at Al-Aqsa Mosque and in the Sheikh Jarrah neighborhood of Jerusalem, where several Palestinian families faced eviction from homes claimed by colonial settler organizations. Videos of Palestinian citizens, such as the case of Mariam al-Ghawi, being forced to leave their homes spread on social media.

Monday morning began with confrontations at Al-Aqsa Mosque, where videos shared on social media showed Palestinians being attacked by Israeli military while praying inside the mosque.

Palestine’s Red Crescent said that since the violence started a week ago, more than 700 Palestinians have been injured in clashes across East Jerusalem with Israeli police, who fired rubber bullets, stun grenades and tear gas.

Egypt’s Ministry of Foreign Affairs said in a statement that Assistant Foreign Minister Nazih El Naggari held a meeting with Israeli ambassador to Egypt Amira Oron, reaffirming Egypt’s stance on rejecting the storming of Al-Aqsa Mosque by Israeli forces and calling for the respect of Islamic holy sites and the right of Palestinian civilians to practice their religious rites.

“Egypt rejects any illegal practices and acts that target the legitimate and inalienable rights of the Palestinians,” Foreign Ministry Spokesman Ahmed Hafez said.

“Egypt will not stand idle towards what is going on in the holy city,” he stated. “It provokes our feelings to see this holy spot turned into a war zone at the hands of the Israeli forces, where the unarmed worshipers were insulted and subjected to beating and arrest instead of being protected to worship freely and safely.”

The Road So Far: Facts and Stories on Egypt’s COVID-19 Vaccine Rollout

China’s Libya Policy and the BRI: Sights Set on the Future

Re: Turkish burger rebranded as ‘Greek’ in Saudi Arabia